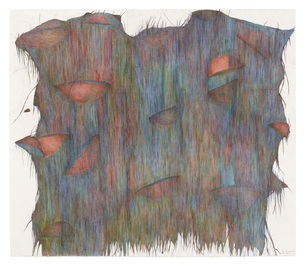 All my endeavors apart from the studio connect back to it – I am excited by ideas and their manifestations. In all my roles – as a studio practitioner, curator and educator, I am interested in connecting visual art and ideas. There are many ways that that this is expressed. In my curatorial practice, it takes the form of exhibits organized around a theme which encompasses one or several ideas – the selection of artists express that idea in many ways, and similarly with my organization Catalyst Conversations (which is devoted to the dialogue between art and science) – artists and scientists talk to each other about a range of issues – and demonstrate the synergy between them.

In my studio practice, I am informed by ineffable ideas – Language (and related text, voice, sound), History, Memory. What I want to do with the work is impossible; I want mute objects to speak. The process itself becomes a way to visualize this unattainable goal and therefore is the way the practice propels itself – so that the subsequent projects attempt to complete the previous ones. I continue to be interested in making objects, which have a particular presence; I want to make them dissipate, and eventually disappear. I am interested in making manifest what I see as my interior life. The drawings are about things disappearing, about things ending. They are made in tandem and in contrast to the columns, which assert themselves and cannot vanish unless removed or degraded in some way. The paradox of making and negating occurs at the same time.

With the Dispel, Dissipate Series and Cris de Coeur series, I am interested in making manifest what I see as my interior life. The drawings are about things disappearing, about things ending. The paradox of making and negating occurs at the same time. They reference objects whose mass and weight are evident, adhering to the force of gravity. Yet they seem to be made of some kind of thread, intensely woven, spun around itself. The drawings are unravelling, dissipating; dispelling themselves. These pieces speak to the fraying of our lives as we have known them to be.  But they speak to possibility too, and diversity, richness and poetic reassembly.
Loading...